When I was a kid I read this West African grassland folklore; it was a story of four brothers who fought each other all the time. Their father who was distraught by their fighting called them to his hut one day. When they got to his hut, he gave them each a broom stick and told them to break it. Though confused, they easily broke the broom stick. He then gave them a whole bundle of broom sticks tied into a broom and asked them to break it. For minutes they tried to break the broom to no avail. He then told them the reason they could not break it was because with greater number of broom sticks, the broom had more strength. He then applied it to them saying divided they would fall apart, but united they cannot be easily defeated.

Recently, i came across this  mind blowing story which took me on a journey to my childhood. 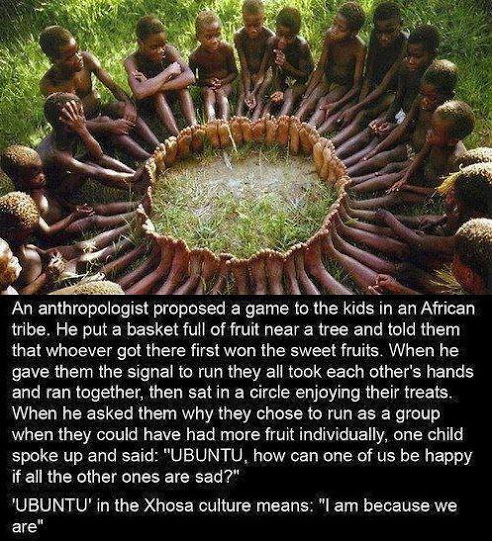 These kids are an example of the change we need. As youths under the burden of unemployment, i believe if we took each others hands and ran as a group; we would spark a revolution beyond our imagination. We have the numbers, energy and zeal on our side. Instead of spiting over worn politicians, together we could create for ourselves and be our own voices. Sometimes we need to put aside self interest and realize we have more to benefit when we look at the big picture. 'I can do things you cannot, you can do things i cannot; together we can do great things, Mother Theresa' The easiest way to win in this world is to be part of a team. As youths in this era; networking, creation of discussion forums, formation of business alliances, harnessing creativity collaboratively; are the tools we have at our disposal for change. Your talent, idea can get lost on your own; but the masterpiece produced from a colorful blend of ideas and initiative will be a marvel to the world.The most successful communities function on a 'no one is left behind' policy. If you want to go quickly, go alone. If you want to go far, go together. A family or country does not need to be perfect, it just needs to be united. Like kwame Nkrumah, I believe I am an African not because I was born in Africa, but because Africa was born in me.
If you think you think you are too small to change the world, then you haven't spent the night with a mosquito
- See more at: http://camerdream.blogspot.com/2015/07/many-hands-make-beautiful-work.html#sthash.OSrGxjJX.dpuf
Posted by mentor africa at 00:19